Meet Them : Babymetal - Do They Deserve Their Success? 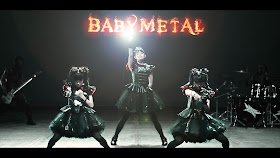 Babymetal...a band from Japan for which all talk lately.

Many people have expressed negative comments about their music , but on the other many and those who express their support on the "Babymetal phenomenon" and the madness of these three girls.

But who are the Babymetal ... let's write a few things about them.

Babymetal is a Japanese metal idol band. Their line-up consists of Nakamoto Suzuka as "Su-metal", Mizuno Yui as "Yuimetal", and Kikuchi Moa as "Moametal". The concept of the group is a fusion of the metal and idol genres. The three teenage girls and their band are managed by the Amuse talent agency.

They released their debut album of the same name in February 2014.

The band defines its style as a new genre called "kawaii metal" ("kawaii" meaning "cute") and clarifies that it is "a mix of J-pop idol and heavy metal" (because of their cute Japanese teen pop style fused together with various heavy metal styles). In the music press, the group is most commonly associated with the genres death metal, heavy metal and J-pop, but some of their songs has been classified as symphonic death metal ("Babymetal Death") and melodic speed metal ("ijime, Dame, Zettai"), and their edgy sound have been likened to electronicore ("Ii ne!").

Before the trio formed, they previously had no experience of the metal genre.

Yuimetal admitted that beforehand the concept of heavy metal actually scared her, but later stated that "It’s fun and I see why people enjoy it so much! I still don’t completely understand it, but I'm interested."

Kobametal, the band's producer, aimed to create a fusion of heavy metal genres and mix them with Japanese idol music, quoting "At Amuse, we have this group called Perfume and I really like them. But I thought, if I’m gonna make a group, how would I do it? I really like metal, so I figured I’d try mixing metal and idol music."

So far they have released two studio albums(Babymetal-2014 , Metal Resistance -2016) 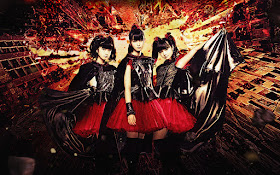 Many famous musicians have expressed their support to Babymetal.

Rob Zombie ,Rob Halford, Slash(He said that he really enjoy their energy and music while when then they asked him if he would share the stage with Babymetal he just said "Offcourse i would like to play with Babymetal on stage" and also stated that "It is the most exciting thing I have seen and heard last .And this because they have the look and they are girls ") are some of the musicians that express their support to the group.

Former Megadeth guitarist Marty Friedman has also described the band as sounding "like Meshuggah with J-pop on top."

Rob Halford said that he wanted to be on stage with the three girls and his wish came true.

He was with Babymetal on stage at the appearance of the band in Alternative Press Music Awards 2016 event held at the Schottenstein Center in Ohio.


"It is very beautiful to hear and see such a strong and youthful Japanese metal band. I feel very pleased that they invited me to sing with them on this their special appearance. It was an exchange of energy from the roots and the future of the metal scene", said Halford.

Babymetal : Do  they deserve all this success? 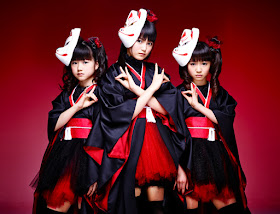 I admit that they have enough songs i really enjoy. I watch with great interest their progress in music.

But can we talk about a band that will be great in the future? Not for sure offcourse (It's so soon) and it cannot be said to have expiration date as well.

All we can do is just press the play button and enjoy their music.

And for the haters or the people that do not like their music?

Just relax and listen to something else.So simple!

If you like them or not, they are the hottest name right now.